A total hip replacement is a surgical procedure whereby the diseased cartilage and bone of the hip joint is surgically replaced with artificial materials. The normal hip joint is a ball and socket joint. The socket is a “cup-shaped” component of the pelvis called the acetabulum. The ball is the head of the thigh bone (femur). Total hip joint replacement involves surgical removal of the diseased ball and socket and replacing them with a metal (or ceramic) ball and stem inserted into the femur bone and an artificial plastic (or ceramic) cup socket. The metallic artificial ball and stem are referred to as the “femoral prosthesis” and the plastic cup socket is the “acetabular prosthesis.” Upon inserting the prosthesis into the central core of the femur, it is fixed with a bony cement called methyl methacrylate. Alternatively, a “cementless” prosthesis is used that has microscopic pores which allow bony in growths from the normal femur into the prosthesis stem. This “cementless” hip is said to have a longer durability and is considered especially for younger patients. Total hip replacement is also referred to as total hip arthroplasty. 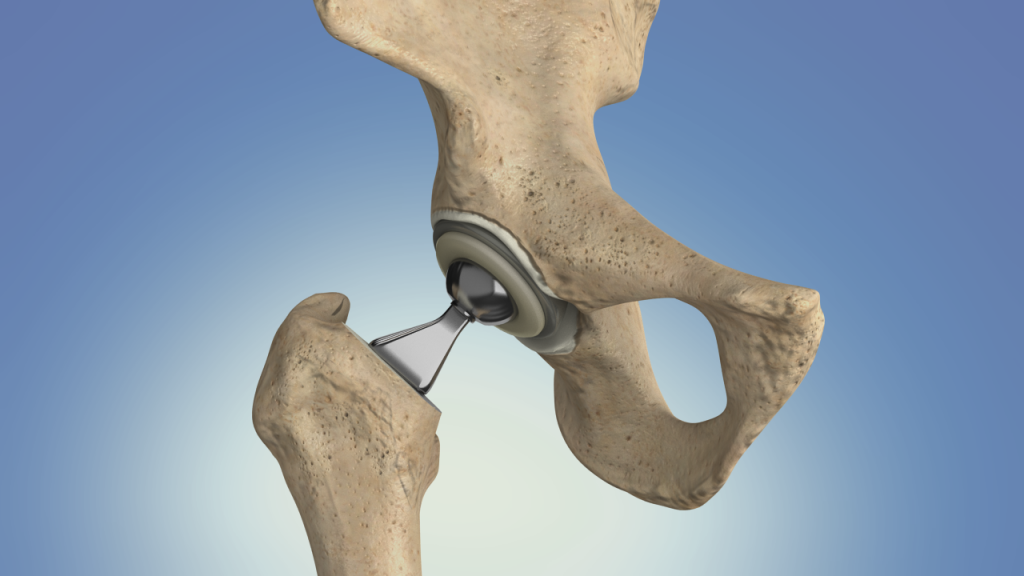 What is the procedure?

Surgical procedures differ depending on the patient’s needs and the surgeon’s approach, but generally the steps are as follows:
A hip replacement is performed for treatment of severe arthritis. Hip arthritis is a common cause of hip pain. Hip arthritis causes the normal smooth cartilage surface of the joint to wear out over time. As this cartilage gets worn away, bone is exposed and normal movements of the hip become difficult. The hip joint is a ball-and-socket joint — the ball rotates within the socket to allow hip movement.

This cartilage allows for the hip joint to move freely. When the cartilage lining of the joint wears out, hip movements become stiff and painful. The next step of hip replacement surgery is to remove the damaged cartilage and bone. To remove the worn-out ball the bone is cut to remove the femoral head. Once the arthritic ball is removed, the worn out socket can be addressed. Unlike the ball, this bone cannot be cut off — the socket of the hip joint is part of the pelvis bone. Once the damaged bone has been removed from the acetabulum, the new socket of the hip replacement can be inserted. The socket of the pelvis is called the acetabulum, and the part of the hip replacement inserted into the socket is called the acetabular component. The acetabular component is held tightly in the pelvis by making the socket slightly smaller than the acetabular component, and wedging the implant into the bone. 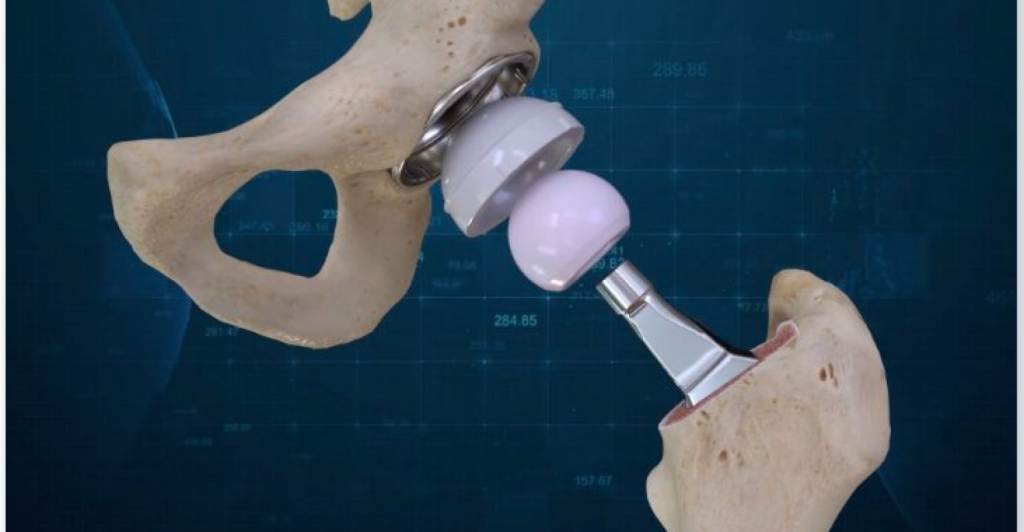 The acetabular component is held tightly in the pelvis by making the socket slightly smaller than the acetabular component, and wedging the implant into the bone.A rough surface covering the implant allows the bone to grow into the implant over time. With the stem inserted down the centre of the thigh bone, the ball of the ball-and-socket hip joint can be inserted on top of the stem. A metal ball is tightly fit onto the top of the stem. Much of the design of a modern hip replacement implant is really just a way to hold the ball of the hip joint in the right position. There is a style of hip replacement where the ball is resurfaced rather than replaced, meaning there is less implanted material in the body – this style of hip replacement is called Hip Resurfacing Surgery. With the socket, stem, and ball all inserted, the hip replacement can be placed in final position.

Hip replacement is a procedure in which a doctor surgically removes a painful hip joint often made from metal or plastic components.

● There is a stay of 2-3 days during the hip replacement procedure.

What are the new materials in total hip replacement?

Newer materials are used to increase the longetivity of the components implanted. Highly cross-linked ultra-high molecular weight polyethylene is used instead of the regular ultra-high molecular weight polyethylene. Ceramic surfaces are used for younger patients as these surfaces are very resistant to wear and hence, last a very long time. Ceramic joints normally cost a little higher than the regular joints.
At Shah Hospital, we offer various choices of choosing materials used in hip replacement.

What are the new designs in total hip replacement?

In regular hip replacements, the polyethylene surface or the ceramic surface is fixed into the acetabular shell implanted in the acetabulum. A large head of metal or ceramic 28 or 36 mm is routinely used to get good range of motion.

Dual motion has been introduced lately for hip replacements. This technique has been practiced in France for the last thirty five years but it is only for the last few years that it has left the French shores. Here, the polyethylene insert is also mobile in the socket. Hence, the first motion is between the head and the insert and there is also an additional motion between the insert and the socket. This allows for complete range of motion and full function including sitting cross-legged and squatting without compromising stability.
At Shah Hospital, dual mobility total hip replacements are performed routinely.

An institution that is built on a foundation of good ethics and excellent expertise, Shah Hospital has left no stone upturned to have the best medical professionals.